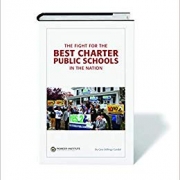 It feels like an odd time to be celebrating charter school success in Massachusetts, but that’s just what Cara Candal does in a new book that not only touts the schools, but telegraphs a bold claim about them in its title.

The Fight for the Best Charter Public Schools in the Nation, published by the charter-friendly public think tank Pioneer Institute where Candal is a senior fellow, leaves no doubt about the author’s view of the independently operated, but publicly funded, schools that were first authorized in the state’s 1993 Education Reform Act.

But Candal is an honest broker. She doesn’t ignore criticism of charters, such as their long-standing practice in the past of not “backfiling” empty seats during the school year. And she says charters have, as some critics charge, not always made good on the promise that these schools would share with districts best practices and other lessons to improve education more broadly.

Decision-makers across Massachusetts listen to teachers, students, families, and community members when it comes to shaping education policy. Get involved with MCPSA today to support the nation’s top-performing charter public school sector in the country and make it possible for every child to reach their full potential.

Ways to Get Involved

YOU ARE NOW LEAVING MASSCHARTERSCHOOLS.ORG

By clicking “visit website” below, you will be directed to a website operated by a 501(c)(4) entity called Advocates for Massachusetts Charter Public Schools.

Governor Baker has ordered a suspension of school operations for educational purposes at all public and private elementary and secondary (K-12) schools in the Commonwealth for the rest of the academic year. Please check your charter public school's website for additional details including opportunities for meal pick-up and distance learning.